Remembering Per Enge, a leading light in the GNSS community

The European GNSS Agency (GSA) joins the international GNSS community in remembering Professor Per Kristian Enge, a friend and colleague who inspired many Europeans as one of the world’s foremost experts in GNSS technologies.

A professor at Stanford University, where he co-founded and directed the Stanford Centre for Position, Navigation and Time, Per pioneered research that led to the development of the Wide Area Augmentation System (WAAS) and Local Area Augmentation Systems (LAAS). WAAS, which provides the same service in the United States as EGNOS in Europe, became fully operational for aviation in the US in 2003.

The GSA in particular remembers Per for his outstanding contribution to the Horizon 2020 project RHINOS, where he brought his GNSS aeronautics experience to rail applications to create a new high integrity concept for trains. Per’s dedication will always be an example, and the GSA would like to honour him by continuing our joint work, building on his enthusiasm and his visionary approach.
"Per has long been a guiding light for the GNSS community, including for the GSA. More recently he has inspired us with his work on the convergence between satellite navigation and the rail sector. The best way we can honour his memory now is to continue working in the direction he has shown us," said GSA Executive Director Carlo des Dorides.
Lasting legacy
It was not only his colleagues at the GSA that benefited from his experience, Per was a teacher and mentor to many Ph.D. and other graduate-level students at Stanford and helped launch a popular massive open online course (MOOC) for the GPS community outside the university.
Per was born Oct. 29, 1953, in Bergen, Norway. He immigrated at the age of 2 to the United States. He earned his BS in electrical engineering at the University of Massachusetts at Amherst in 1975 and his MS and PhD at the University of Illinois Urbana-Champaign in 1979 and 1983, respectively.
Further biographical information is available in the Stanford News. 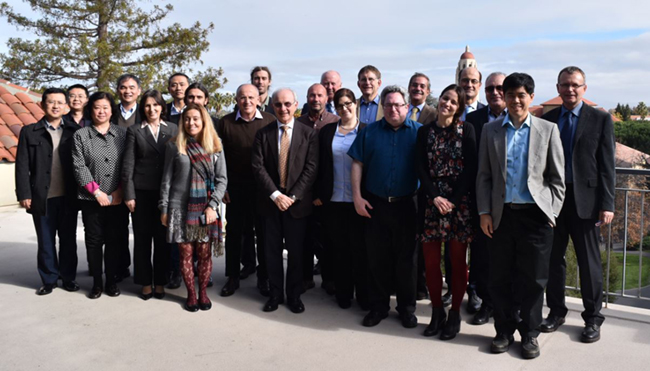 Per Enge with H2020 RHINOS team in Stanford, Rail-GNSS workshop, November 2016
Media note: This feature can be republished without charge provided the European GNSS Agency (GSA) is acknowledged as the source at the top or the bottom of the story. You must request permission before you use any of the photographs on the site. If you republish, we would be grateful if you could link the article back to the GSA website (http://www.gsa.europa.eu).