1: Galileo satellite GSAT0104 is not used for the Galileo Open Service, but only for the SAR/Galileo service

Note that the average dynamic parameters values of auxiliary slots C14, B14 and B15 can be computed as per Nominal Galileo orbits.
4: True anomaly (υ) and mean anomaly (M) are related through the eccentric anomaly and the Kepler’s equation. The true anomaly can be also solved from the mean anomaly by using a series expansion approach of the so-called equation of the center. For reference orbit computation the series solution can be truncated in the following terms:

Note that for circular orbits (eccentricity =0) both mean and true anomalies are identical.
Source: ESA
5: ISO-8601 Date and time format

The next figure illustrates the geometric properties of the usual set of orbital elements used to describe the motion of a satellite in Earth orbit, well characterized by the Keplerian elements of an elliptical orbit. 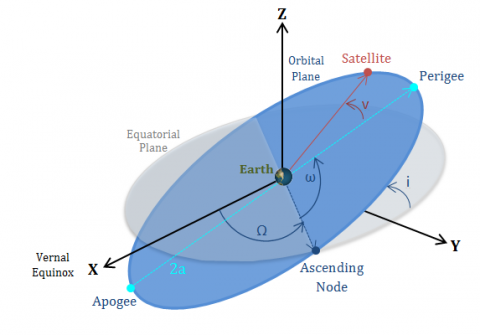 Ω: Right ascension of Ascending Node (RAAN) defines the relative angular phasing between the orbital plane and the Vernal Equinox, which is the point of intersection between the Sun’s trajectory and the Earth’s equatorial plane. Due to the Oblateness of the Earth, the RAAN is decreasing about 10 degrees per year.

ω: Argument of perigee is the angle between the ascending node and perigee directions, measured along the orbital plane. The perigee is the point of closest approach of the satellite to the centre of mass of the earth. The most distant position is the Apogee. Both are in the orbital ellipse semi-major axis direction.

The satellite height is characterized by the orbit’s semimajor axis ‘a’, the variation in the radial distance due to the ellipticity of the orbit (the eccentricity ‘e’), and the angular distance ‘v’ (the true anomaly) from the point of closest approach in the orbit (called the Perigee).

Slot: The Galileo reference constellation has a total of 30 Medium Earth Orbit (MEO) satellites, including 6 auxiliary satellites, in a so called Walker 24/3/1 constellation. This particular Walker configuration implies that the Galileo constellation consists of 24 satellites homogenously distributed in three different orbital planes (A, B and C) separated in the equatorial plane by 120 degrees. 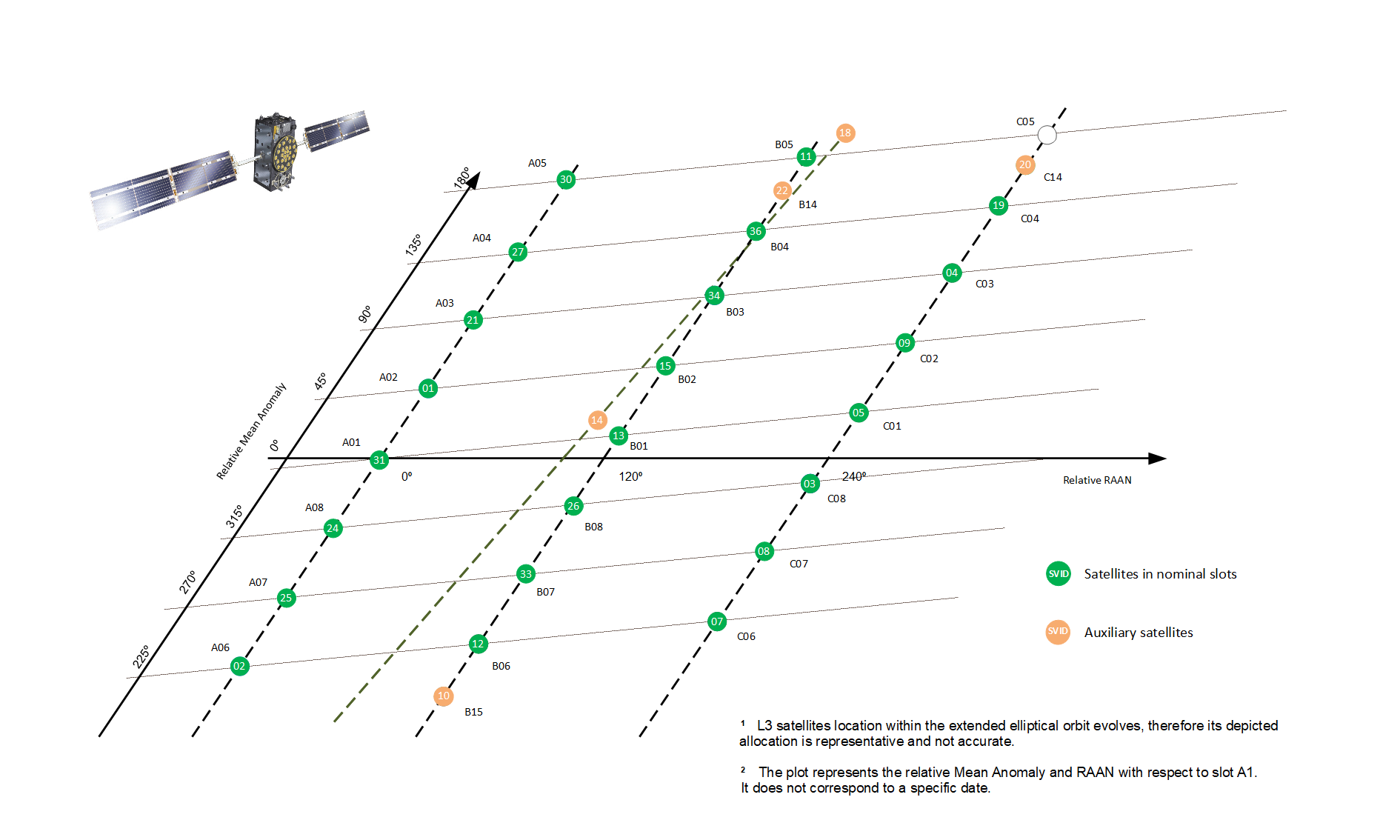 1 The satellite nickname corresponds with the name of the child who was the winner of the “Galileo Children's Drawing Competition” on each European Member State.