GSA and ESNC – a decade of partnership in innovation

The European GNSS Agency (GSA) is celebrating 10 years of association with the European Satellite Navigation Competition, looking back on a fruitful alliance and looking forward to this year's batch of Competition entrants.

The 2018 edition of the European Satellite Navigation Competition (ESNC) will see the GSA awarding first-place, second-place and third-place cash prizes on the special topic 'When and Where? – Exact timing and positioning matters'. Judges are expected to be particularly attentive to proposals that leverage specific EGNSS differentiators, such as: 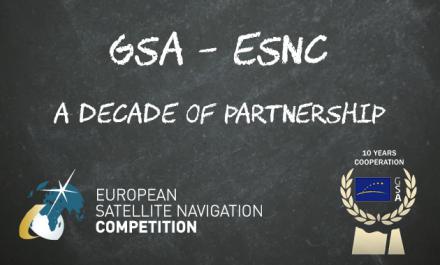 As part of its primary mission, the GSA has helped to foster countless innovations, revealing unexpected trends in the burgeoning downstream satellite navigation market. And, for the past 10 years, the ESNC has been a big part of that effort. Under the banner of its GSA ESNC Special Topic Prizes, the Agency has received 811 complete submissions, more than 80 innovative proposals per year, covering new applications across the broad scope of sectors that benefit from Galileo and EGNOS. Among the brand-new and developing fields already addressed by previous participants are:

Another bright light is the 2011 GSA winner, CAT UAV, which put forward the first civilian UAV application in the Competition. It features an innovative traffic collision avoidance system, and the resulting start-up, based in Spain, has since established one of the first drone test and training centers, with a runway and its own segregated airspace.

These and other GSA ESNC prize winners continue to solidify the Competition's role as a positive driver for new, useful and economically viable GNSS applications.

In addition to the GSA Special Topic prize, the has GSA triggered the University Challenge, bridging the gap from GNSS research and academia to entrepreneurship, and the GNSS Living Lab Prize, supporting innovative testing of GNSS-related products.

The European Satellite Navigation Completion (ESNC), or the Galileo Masters, is an international competition organized by Anwendungszentrum GmbH Oberpfaffenhofen (AZO), and supported by the GSA, among others.

Regional challenges are hosted by local partners from all over the world and special prizes are awarded by a select group of GNSS stakeholders. The overall winner is chosen from among all the regional and special prize winners by an international panel of experts.