With the release of Android 7 (Nougat) in 2016, Google made GNSS raw measurements available to smartphone users, allowing them to improve their positioning accuracy. A tutorial at the IPIN 2018 indoor positioning and navigation conference in Nantes on 24 September explained how users can access raw measurements and examined how they are contributing to better location performance in mass market applications. 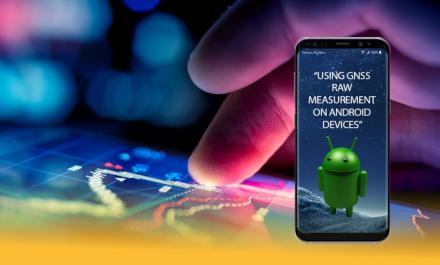 operating system. With this release, Google made GNSS raw measurements available to users for the first time, giving them access to a range of advanced GNSS processing techniques that had previously been restricted to more professional GNSS receivers.

With these raw measurements, Android users are now able to calculate pseudoranges (the distance between the user’s receiver and the satellite) and position, velocity and time (PVT) on their own, using their Android device. ‘So what?’ you might ask. Well, the opportunity to use this information can deliver significant benefits in a number of areas.

European GNSS Agency (GSA) Market Development Innovation Officer Martin Sunkevic highlighted some of these benefits at the IPIN 2018 tutorial. He said that, first of all, in the area of research and development, the measurements could be used to test hardware and software solutions for new algorithms, such as for modelling the ionosphere or troposphere. But the benefits to users do not stop there.

“Access to raw measurements also means that developers can now use advanced positioning techniques to create solutions that are currently only available in professional receivers,” Sunkevic said, adding that this increased accuracy is resulting in a technological push to develop new applications. As an example of an app providing high accuracy, he noted PPP WizzLite, which can achieve accuracy of 1-2 meters in motion, and sub-metre accuracy in static mode.

What’s more, access to raw measurements offers new ways to detect radio frequency interference and will make it possible to use the Galileo Open Service Navigation Message Authentication (OS-NMA) to verify data from the Galileo navigation message, which will soon help to increase the robustness of the signal.

In the area of testing, performance monitoring and education, the GSA innovation officer noted that the raw measurements could be used to compare solutions from individual constellations. Using applications such as GNSSLogger and RINEX ON, it is possible to test only satellites from the Galileo constellation, for example. A smartphone testing campaign conducted by the GSA showed that Galileo delivered impressive accuracy gains.

Moisés Navarro Gallardo, Navigation User Receiver Testing Engineer at Airbus, provided an example on how to use RTK positioning using raw measurements. Firstly, there is the raw measurement log file, which can be logged using, for instance, the GNSSLogger from Google. Once logged, the raw measurements can be converted, in post processing, into a standard format, such as RINEX. Other tools, like RINEX GEO++, convert the raw data into RINEX format in real time.

Next, it is necessary to have the ephemerides, which are the parameters needed to compute the satellite positions – these can be downloaded from the Internet, Navarro Gallardo said. The observations from a base station are also needed, which can also be downloaded from the Internet (IGS network) or received from local stations. Finally, an RTK tool is required, like the public RTKLIP tool. With these elements in place, the raw measurements can be used in the RTK PVT solution to allow users to mitigate common errors (between station and the user smartphone) and to achieve a more accurate position.

Around the same time as the Android 7 release, the GSA set up a Task Force to engage with navigation and positioning experts and boost innovation around this new feature. Sunkevic noted at the tutorial that one of the GSA’s core responsibilities is to develop the GNSS market and ensure that Galileo is used by as many people as possible.

He said that, with the Raw Measurements Task Force, the GSA aimed to valorise the main Galileo differentiators, including high accuracy and authentication, and to share knowledge and expertise on Android raw measurements and their wider use, including their potential for high accuracy positioning techniques.

One of the main outcomes of the Task Force, highlighted at the conference, is a White Paper with which the Task Force promotes the use of GNSS raw measurements in mass market applications and demonstrates their use to the GNSS community through practical examples.

Promoting the use of raw measurements among the development community is also the aim of an upcoming Galileo App Competition, announced at the IPIN session by Galileo Service Performance Engineer Gaetano Galluzzo, from the European Space Agency’s research and technology centre (ESA-ESTEC).

Galuzzo said that the goal of the competition is to design an Android application capable of performing fixes using single- and dual-frequency raw measurements from GPS, Galileo and GPS + Galileo satellites. Run by ESA in collaboration with the GSA and the European Commission, with support from Google, the competition is open to all students from European universities and trainees in posts at European research and development organisations.

In his presentation at the conference, the ESA engineer highlighted some of the key ingredients needed for high accuracy apps in smartphones, including raw measurements, continuous carrier phase measurements, and dual frequency chips for fast convergence. He noted in particular that dual frequency measurements, along with chipset algorithmic enhancements, are enabling a significant reduction in positioning error, and that decimetre-level accuracy is possible even in devices with low-cost GNSS chipsets, which means that the advantages of Galileo can be enjoyed by people on all budgets.

The GSA recently launched an enhanced version of its popular UseGalileo.eu site, which tracks the many new Galileo-enabled devices and services coming onto the market. You can check the site to find out which chipsets, smartphones or wearables are Galileo-enabled.