Galileo supports compliance with new Standards and Recommended Practices (SARPs) from the International Civil Aviation Organisation relating to the location of an aeroplane in distress. This and other benefits of European GNSS (Galileo and EGNOS) for the aviation sector were in focus at the European Regions Airline Association (ERA) General Assembly, which took place on 9-11 October in Edinburg, UK. 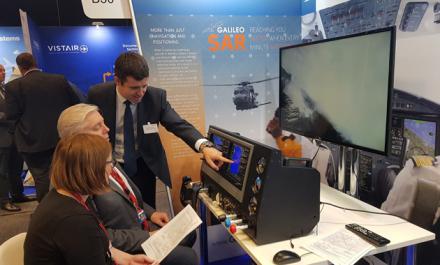 ADT is defined as the capability, using transmission of information, from which the position of an aircraft in distress can be determined at least once every minute and which is resilient to failures of the aircraft’s electrical power, navigation and communication systems.

At a meeting of the ERA Operations Group held during the General Assembly, Katerina Strelcova, Aviation Market Development Officer at the European GNSS Agency (GSA) stressed that Galileo would enable compliance with these requirements, thanks to the Galileo Search and Rescue (SAR) service. The Galileo SAR service is Europe’s contribution to the international COSPAS-SARSAT system.

The corresponding European regulation for ADT is (EU) 2015/2338, which is not technology-specific. One of the solutions – the Emergency Locator Transmitter for Distress Tracking ELT (DT) – is based on the use of the Galileo SAR service and the COSPAS-SARSAT system.

The SAR transponder on Galileo satellites picks up signals emitted from distress beacons and broadcasts this information to dedicated ground stations (MEOLUTs). Once these signals are detected and the beacons are located by the MEOLUTs, COSPAS-SARSAT Mission Control Centres (MCC) receive the beacon location information and distribute the data to the relevant rescue centres (RCC) worldwide. In addition, Galileo introduces a new concept, i.e. the Return Link Service (RLS) that is currently being defined and standardised by EUROCAE.

“All Galileo satellites are able to offer a Return Link Service (RLS), which enables an acknowledgement message that allows people in distress to know that their message has been received and that help is on the way,” Strelcova said. She also noted that the RLS Command Service could make it possible to remotely activate and deactivate an emergency locator transmitter, ELT (DT) on an aircraft.

“This link will enable the ELT to be triggered from the ground, by a third party having access to the Return Link Service Provider, and establish the position of a non-cooperative aircraft with which communications have been lost. This will make it possible to track the aircraft when other systems are not responding,” she said.

At the General, Assembly, the GSA launched a consultation process among airlines about the Galileo RLS with a view to gathering requirements from interested parties, raising awareness about the need for cooperation, and fostering the adoption of new standards and equipment in order to improve safety in SAR operations.

Also highlighted at the session was the EGNSS User Consultation Platform, which will be held as part of European Space Week in Marseille in December. This Platform is a forum for interaction between the Galileo and EGNOS programmes and end users, focused on user needs and requirements. It is an opportunity for the EGNSS programmes to listen to users and key industry players in order to optimise current use of the systems, continuously improve them, and plan for future evolutions. To contribute to the Platform and have your say, register to attend European Space Week here.

The GSA was present at the General Assembly with a stand which included a G1000 EGNOS simulator at which airline operators were briefed on LPV approach procedures. Speaking at the General Assembly, Loganair Flight Support Manager Stewart Houston said that his airline was flying LPV approaches at Kirkwall – the main airport serving Scotland’s Orkney Islands – on its Twin Otter and Islander planes, equipped with G430W.

“Between 19 and 46 Very High Frequency Omni-Directional Ranges (VORs) will be removed in the UK, potentially leaving required navigation performance (RNP) as the only approaches available at several airports,” Houston said.

The ERA General Assembly is a key event for Regional Aviation Stakeholders. This year’s event brought together more than 400 key figures from the European aviation industry. The event is an opportunity to network, discuss key issues affecting the industry, learn from a wide range of thought-provoking conference sessions and celebrate the industry’s successes.