With over 2 500 downloads since it was launched at the start of May, the Galileo Green Lane app is proving to be popular with drivers. Developed by the European GNSS Agency (GSA) in collaboration with the European Commission, the app is a key tool in the EU’s COVID-19 pandemic response. By easing traffic flow through the EU’s borders, the app is helping to support a fundamental EU principle - the free movement of goods and freight in the internal market. 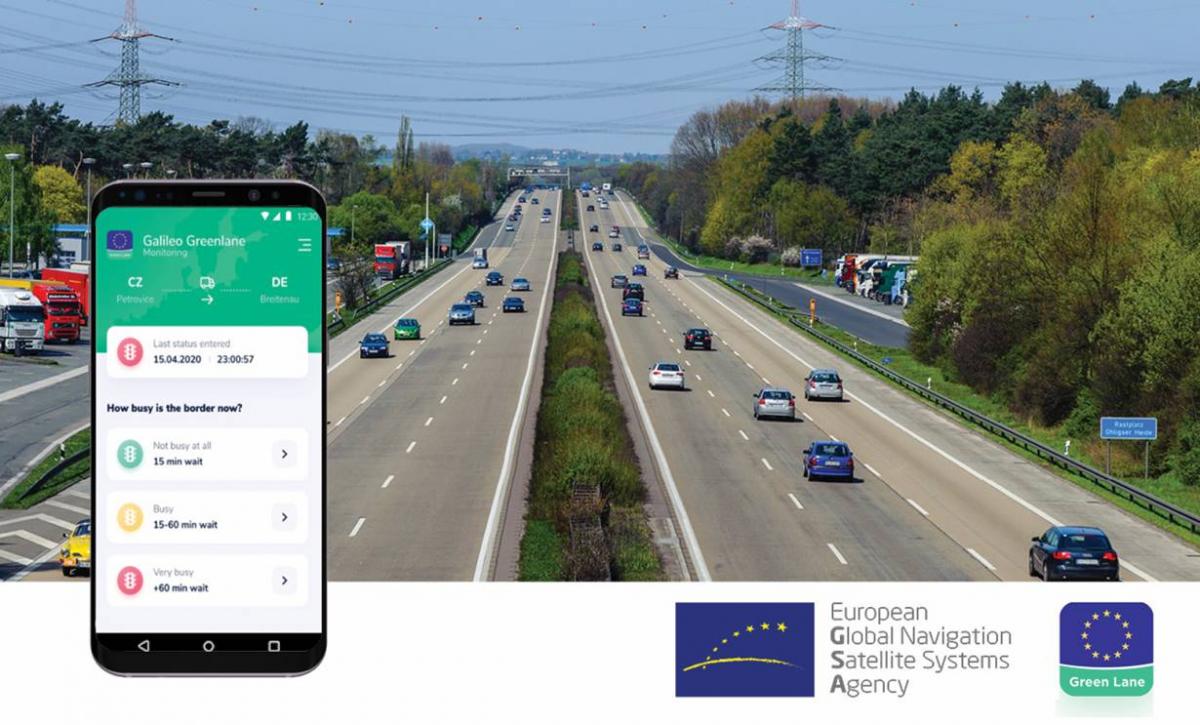 Galileo Green Lane is helping Europe mitigate the impact of the COVID-19 pandemic.

The Galileo Green Lane app uses the positioning services of Galileo- Europe’s Global Navigation Satellite System (GNSS) - to monitor and facilitate the free movement of freight, making it possible to reduce waiting times at the EU’s internal land borders and facilitate the transport of goods.

Over the last few months, the transport sector has played a vital role in the European response to the pandemic – transporting essential goods to fight the crisis and keeping the internal market intact. The Galileo Green Lane App supports drivers and national authorities as they keep up their essential work in these difficult circumstances. The initiative builds on the so-called ‘Green Lanes’, established at land border crossing points by EU Member States following guidelines from the European Commission: On 23 March, the Commission asked all EU Member States to designate relevant border-crossing points along the Trans-European Transport Network (TEN-T) as ‘Green Lane’ border crossings to minimise waiting times and keep freight moving. Via these Green Lanes, freight vehicles should be able to cross the border within a maximum of 15 minutes.

The Galileo Green Lane app is designed to address the needs of both border control authorities and of truck drivers, through two intuitive user interfaces. For border control authorities, the app provides a real-time visualisation of the situation at border crossings along with regular updates on the traffic flow situation. For truck and passenger car drivers, the app also provides real-time border visualisation with an EU-wide map produced by real-time visibility provider Sixfold. This enables drivers to better prepare their routes, by providing advance knowledge of the waiting time at each border crossing.

At the same time, the app provides Member States with a website where they can generate reports automatically, making it easier to comply with EU recommendations. The solution is the product of cooperation not only between EU Member States and agencies, but also with users, who provide the data that is aggregated and analysed to produce the solution. To check out the Galileo Green Lane benefits, download the app here.

Several European Union countries have welcomed the opportunity to use “Galileo Green Lane” and the app has already been tested with the Border Police at border crossings in Hungary, the Czech Republic and Spain, with over 5 000 datasets collected. Testing is still ongoing in France and Greece.

“With the ‘Galileo Green Lane’ app, the GSA is fulfilling its mission to address economic and societal challenges by leveraging the European GNSS capabilities,” said GSA Acting Executive Director Pascal Claudel, more Member States getting involved and more border crossings brought into play, means the benefits of EU investment in space will be more widely felt.

A pilot has also been carried out with drivers, in collaboration with the International Road Transport Union (IRU), with over 2,500 apps downloaded. This pilot generated data from 97 of the total 187 Green Lane border crossings in 26 EU and neighbouring countries.

Commissioner for Transport, Adina Vălean, said: “While borders were closing and lockdowns looming we opened Green Lanes, thus preventing a supply chain crisis. Member States embraced this concept and made it operational very quickly. The Galileo Green Lane app is a direct result of EU coordination in the transport sector and I encourage transport workers and operators to download and use it.”

Commissioner for Internal Market, Thierry Breton, said: “Through the Galileo Green Lane app, we demonstrate the value of space based technologies and applications to provide innovative and concrete solutions, for instance in support to the free flow of goods across the Single Market.”