To keep up with the increasing interest in Galileo and the many new Galileo-enabled devices and services coming onto the market, the European GNSS Agency (GSA) launched an enhanced version of its popular UseGalileo.eu site.

Since the launch of Initial Services in December 2016, 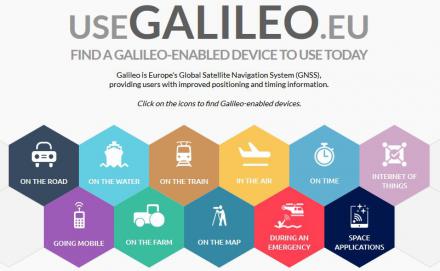 Galileo has been providing more and more users with global positioning, navigation and timing information.

Behind this increase in use is the wide array of Galileo-enabled devices and services that have entered the market over the past couple of years. Just think, back in 2016 there was only one smartphone with Galileo capability. Today, less than two years later, there are over 60 models.

But it’s not just smartphones: Galileo can now be found in applications and devices ranging from tablets to wearables and from aircraft to personal vehicles. For example, as of April, all new types of cars sold in the EU must be equipped with Galileo as required by the eCall regulation. Galileo is also being increasingly used in drones to ensure smooth navigation and in Search and Rescue operations to save lives.

With this increased interest in Galileo, both the general public and industry want to know what devices are Galileo-capable. As new devices are constantly being added to the list, the GSA launched an enhanced version of its popular UseGalileo.eu website.

“We are proud to see how quickly Galileo is being embraced by European citizens and businesses,” says GSA Executive Director Carlo des Dorides. “UseGalileo is the perfect tool to showcase the results of the commitment by the people behind the European space programme.”

Watch this: Who is using Galileo today?

The enhanced site, which allows users to easily search and keep track of Galileo-enabled devices as they become available, includes several new features. Regular users will notice the addition of categories covering applications in the timing, Internet of Things (IoT) and space application segments. Furthermore, other categories, such as aviation, emergency services and agriculture, now include a number of sub-categories. For example, within the aviation segment, users can narrow their search to Galileo-enabled devices and applications for avionics, airports and Unmanned Aerial Vehicles (UAVs). Flight operators can even search per their particular aircraft, whether that be a business jet, a helicopter or a commercial airliner.

“Through a number of tailored products, the GSA is able to cater to the unique needs of different user communities,” adds des Dorides. “The enhanced UseGalileo site and its many segment-specific search functions is another example of how we keep the user at the centre of European GNSS.”