Carmaker Volvo presented its V60 model, the first one equipped with the Pan-European eCall emergency response system, at the ITS World Congress 2018 in Copenhagen on 18 September. eCall leverages the precise positioning offered by Galileo and EGNOS to quickly share the location with emergency services in the event of a road accident, automatically dialling the European emergency number 112. 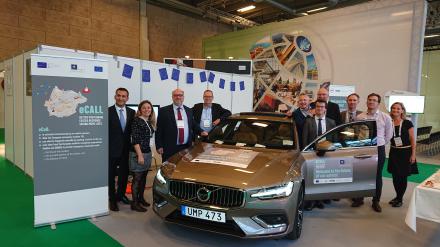 important milestone for the European space programme, as it is the first vehicle´s passive safety application enabled by Galileo and EGNOS. Speaking at the event, GSA Officer Alberto Fernández Wyttenbach stressed that this milestone could not have been reached without international industrial cooperation. “This level of industrial cooperation is something that the EU is particularly trying to foster,” he said.

Volvo is the first carmaker to announce that it is equipping its vehicles with eCall, complementing the previous OnCall system for technical assistance. Leif Ivarsson, Legal Manager for Telematics & Connectivity at Volvo Cars noted that Russia was first country to introduce a similar system, with its ERA-GLONASS rapid response. However, following the rollout of the pan-European eCall, Ivarsson said that the system could be used as a template for similar systems in Malaysia, Korea, Japan or the United Arab Emirates in the near future. “In a few years the service might be global,” he said.

Andreas Bergvall from ACTIA Nordic in Sweden, the manufacturer of the device installed in the Volvo cars, highlighted the added value provided by Galileo. “The contribution is twofold. First of all there is the increased signal availability that it provides, this is very important.

Equally important is the significant enhancement of accuracy positioning,” he said, adding that Galileo’s high accuracy will be also a key enabler of new services, such as automated driving.

To provide the required level of service, eCall needs to be 100% reliable, NavCert Managing Director Martin Grzebellus said at the launch event. “As it is the first time that Galileo is playing a key role in the vehicle´s safety, so certification is very important,” he said.

Grzebellus said that while Volvo is the first carmaker to launch eCall on the European market, NavCert is currently testing eCall in 10 other vehicles, with the next launch expected in just few weeks, so stay tuned!

The eCall device in the Volvo vehicles is manufactured by ACTIA Nordic in Sweden, is supported by the WirelessCar platform, and has been successfully tested by the NavCert eCall Laboratory in Germany. The readiness of automotive suppliers and technical services to equip the vehicles was partially due to actions taken by the GSA and the European Commission’s Joint Research Centre, who launched a testing campaign and produced a joint report containing a set of guidelines to facilitate the implementation of eCall testing in compliance with the EU Regulation. Indeed, more eCall models from Volvo are expected to be launched by the end of 2018, in particular the S60 and the V60CC.