European space community steps up to Security and Defence

A special session at the European Space Week conference in Marseille featured representatives of key EU space bodies addressing challenges and implications in the area of Security and Defence. 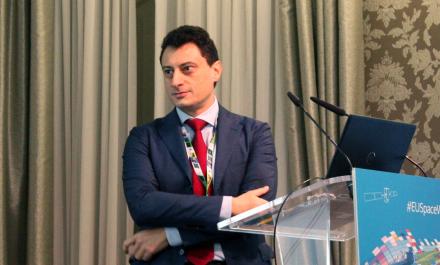 In an evolving global security context, it becomes increasingly critical to ensure the independent capabilities and freedom of action of the European Union and its Member States. "Security and defence is becoming more and more a priority field for the EU," said European Space Week session chair Jean-Pierre Diris, Head of Telecommunications and Navigation Projects at the French Space Agency. "The list of recent terrorist attacks is long and terrible, from Paris to Brussels to Berlin, Barcelona and Madrid, and many others. We have the migration crisis coming from the south, and Russia has made clear its intentions at the EU's eastern borders."

Geopolitics is changing, Diris said, with the USA seeking to reduce its burden and asking its allies to bear more of the cost of defence. "We in Europe must master our own security and defence," he said. "Moreover, by increasing synergies between civilian and security activities, we could reduce costs and improve efficiency." Among the central priorities as the Union looks forward, Diris said, is a credible European defence fund, with a figure of around 1.5 billion per year now having been proposed. "An annual review should be carried out," he said, "to make sure there is no duplication of efforts. And there needs to be a permanent structured cooperation among EU countries, with joint operations."

While the EU flagship space programmes, Galileo and Copernicus, are essentially civil and commercial in nature, both have the potential for military use, making them possible assets as Europe moves towards a more independent stance. Evi Papantoniou, European Commission Head of Unit for Galileo and EGNOS legal and institutional aspects, said: "Strategic autonomy has become a buzzword for Europe. But we want to be sure we understand what that means. We don't want to create additional tension with our external allies."

In the area of security and defence, said Papantoniou, Europe is proposing the creation of a European Defence Fund to support the European defence industry, promoting cooperation between Member States. This is not about creating a "European army", as President Juncker said, but working together with Member States, addressing the new security challenges.

Given the importance of space-related activities for the European economy and for the lives of its citizens, achieving and maintaining a high degree of security is a key priority. This priority applies to the protection of the EU Space Programme itself, which encompasses Galileo, EGNOS, Copernicus, the GovSatCom initiative and Space Situational Awareness (SSA).

Stefano Iannitti, Head of Security at the European GNSS Agency (GSA), discussed the role of the Agency in this context. "One of the major focuses of the GSA is security - security of the European GNSS systems and of their operations, of the services," he said. Ensuring that Galileo and EGNOS services are secure involves a number of elements, Iannitti said, including the implementation of security governance, policies, requirements and standards.

"A specific team at the GSA is in charge of security engineering for operations and services. This team is also responsible for cyber security," Iannitti said. "And indeed this area is growing because of the increasing threats of this type. Another team is in charge of handling the cryptographic items in use in the EU GNSS."

Finally, the GSA is focused on the Galileo Public Regulated Service (PRS) and the implementation of its requirements. "Here we work on PRS engineering and evolution, PRS operations and service provision, and finally we focus on the PRS user segment and access," Iannitti said. “This includes user equipment development under GSA-funded projects and support to the Competent PRS Authority (CPA) set-up. And we have ongoing operational demos and validation work. We also have ongoing projects for testing the full operational PRS chain."

Another key role is played by the Galileo Security Monitoring Centre (GSMC), which is an integral part of the Galileo infrastructure. It monitors and takes action regarding security threats, security alerts and the operational status of systems components.

Philippe Rosius, Head of the GSMC explained, "The GSMC is a GSA entity, independent from the operator. It has direct reporting connections with the EC, the European External Action Service (EEAS) and the Members States. We have two sites, one master in France and one back-up, currently being relocated from the UK to Spain."

The GSMC comprises a crew of highly motivated people dedicated to security, he said. Since 1 July 2016, the Centre has been monitoring the safety and security of Galileo operations, providing an interface for Member States and access to the PRS, distributing the cryptographic keys.

With regards to PRS, "we are in the ramp-up phase” he said. “The GSMC will eventually become the single access point for the Member States to the PRS. And we also provide other services, when requested by the European Council, providing GNSS expertise and analysis to a variety of parties”.

"On the question of why we do this work," Rosius said, "it is because our world is not as secure as we would like it to be. We need to be secure against physical and cyber threats, and we need to be able to mitigate the risks. We need to protect our networks, our centres and stations all around the world. And we have a solid European regulatory framework that gives us the authority to carry out our missions within clear boundaries."

Another body with a key role to play is the EU GNSS Security Accreditation Board (SAB), represented at the session by SAB Chair Bruno Vermeire. The Board is the sole Security Accreditation Authority of the European GNSS systems and acts independently, composed of representatives of Member States, the European Commission and the High Representative of the Union for Foreign Affairs and Security Policy.

In his conclusions, Stefano Iannitti reminded participants that security is a transversal activity. "The GSA can be considered as a security hub, supporting all aspects of EU GNSS security. And we at the GSA are ready to share our experience, our competencies, with other EU Space Programmes, because we are confident that we are paving the way towards European space security for European citizens and the European Union."

Europe's other flagship space programme, Copernicus, also came centre stage during the Security and Defence session in Marseille. Distinguished speakers such as Darek Saunders, Senior Research officer at Frontex, the European Border and Coast Guard Agency, Ricardo Vicente of the European Maritime Safety Agency, and Denis Bruckert, Head of the Copernicus Unit at the European Union Satellite Centre (SatCen) all delivered important presentations on how Copernicus is contributing to security- and defence-related Earth Observation missions in virtually every part of the world.

The session also included a roundtable on the GOVSATCOM initiative. Its objective is to ensure in both the civil and military environment reliable, secure and cost-effective satellite communication services for EU and national public authorities managing security-critical missions and operations. The goal is also to enhance European autonomy and overcome fragmentation of demand by making use of affordable and innovative solutions in concert with industrial players.

GOVSATCOM actions are currently taken jointly by the European Commission, the European Defence Agency (EDA) and the European Space Agency (ESA). The first two communication platforms, the Pacis projects, based on a partnership between a group of private providers and satellite operators, are being set up through a cooperative scheme involving ESA and the EDA.

Pablo Gonzalez of Indra, speaking on behalf of the Aerospace and Defence Industry Association (ASD), returned in his presentation to the broader geopolitical perspective. He talked about the recent announcement by the US President about the creation of a new US Space Force.

"In order to reflect on the future in defence it is mandatory to take into account what is going on the other side of the Atlantic," Gonzalez said. "Because usually, the Americans, we need to recognise, especially in the area of defence, are a step ahead of us.

"We currently have an enormous amount of assets in space, tens of billions of Euros in infrastructure, and we need to defend it. Up to now, the ability to attack in space was limited to one, two, three countries. But today, with current technologies, traditional and non-traditional threats, it is possible for much smaller countries or even terrorist organisations to attack these assets. So we need to be able to defend and to counterattack."

This means, Gonzalez argued, "Europe needs to adopt a different mind-set when it comes to the military use of space. We need to work towards the medium term, we need to think about a strategic view," he said. "And here I would say that we need to talk about operational but also technical capabilities, so this is closely linked to industry. Industry is key to developing new capabilities in Europe with the necessary degree of strategic autonomy."

You can access presentations from the Security and Defence session at European Space Week here.