On December 15th 2016 the Galileo Services were declared operational, marking a cornerstone in the field of satellite navigation for European citizens and worldwide. Since then, the EU Agency for the Space Programme has endeavored to increase the robustness of the system and services, enhance market adoption and offer new services to its users. 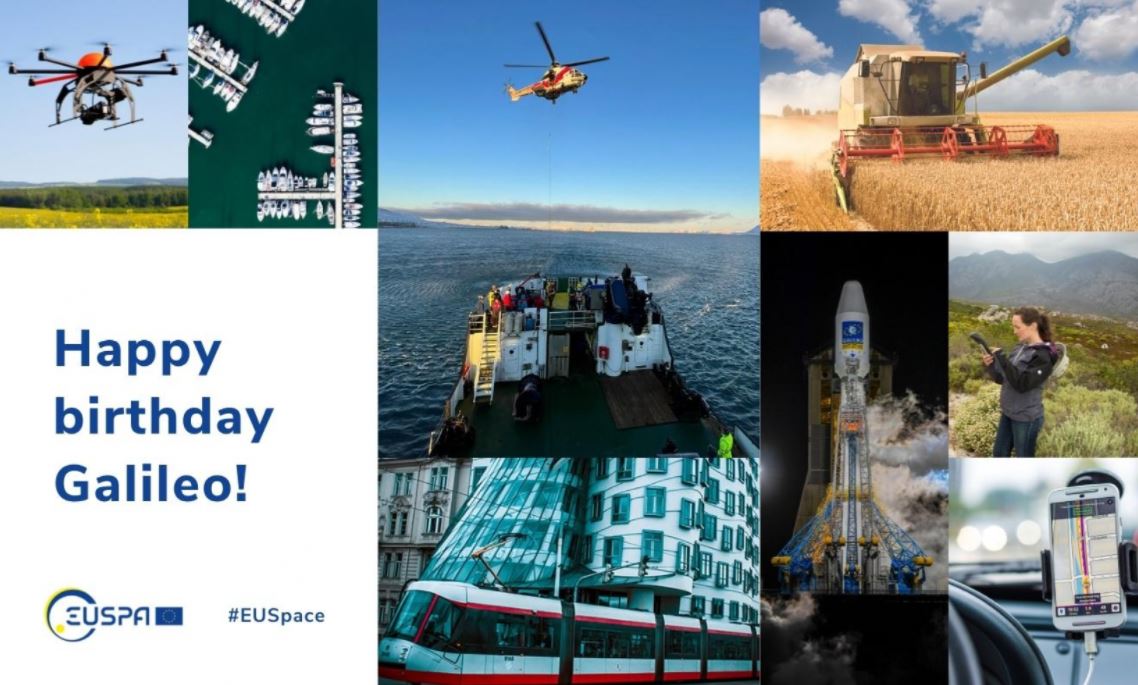 As of today, more than 2.4 billion Galileo-enabled smartphones are sold worldwide.

From the declaration of services, users worldwide from several domains have been reaping the benefits offered by European Union Galileo Programme. To celebrate its 5th anniversary, we want to share some Galileo milestones!

The Galileo state of the art Open Service (OS) is providing free of charge outstanding seamless performance to users worldwide, in terms of ranging, positioning and timing. The Open Service performance ranks first among all GNSS service providers. The improvement of the service remains a priority, with a stronger commitment to liaise with users with the publication of Notice Advisories to Galileo Users (NAGUs), with updates of the ground infrastructure and the current constellation. A new version of the Galileo Open Service Definition Document (OS SDD) will be published soon through the GSC web portal with better Minimum Performance Levels (MPLs) for signal and position availability. Stay Connected to read the new version!

Galileo supports the international Search And Rescue (SAR) satellite services. It is transmitting distress signals from SAR beacons,  operating to COSPAS-SARSAT standards,  and relaying through the Galileo specific Return-Link Service (RLS) the responses to those beacons equipped with Galileo receivers. The Return-Link Service unique and pioneering feature of Galileo was declared operational in January 2020.  The Galileo RLS allows people in distress to receive an automatic acknowledgement that their signal has been picked up by the first responders. Galileo’s contribution to the Medium Earth Orbit Satellites Search and Rescue System (MEOSAR) managed by the International COSPAS-SARSAT Programme translates into 2000 lives saved per year. For example, in November 2020, this SAR/Galileo “lifesaver” service provided in less than 3 minutes key information leading to the successful rescue of a sailor in distress during the Vendee Globe Yacht race.

The first-ever broadcast of High Accuracy Service test signal occurred on 19 May 2021 thanks to Galileo. This service will provide high accuracy data, enabling sub-meter level positioning accuracy. The initial performances are promising. Galileo is dressing the scene for the year to come.

4. Galileo getting in our daily lives and professional applications

Galileo is not only satellites and services: since 2016, Galileo entered quickly in our daily lives, in our cars, smartphones, drones and is enhancing many professional domains, such as maritime navigation, agriculture and geomatics.  EUSPA’s market and user-driven approach has led to this success, developing innovative applications and receivers involving the growing GNSS downstream industry and SMEs, consulting with users, and launching innovation challenges for new space entrepreneurs.

As of today, more than 2.4 billion Galileo-enabled smartphones are sold worldwide. It is a stunning number considering that the first Galileo-enabled smartphone only hit the market in 2016. Since April 2018, all new car models in the European Union are equipped with eCall technology that includes Galileo. In the event of a serious accident, eCall automatically dials 112 - Europe's single emergency number – providing the accurate position of the crashed vehicle to help the first responders reach the site faster.

What is next for Galileo?

The Galileo system robustness is being continuously improved to ensure seamless, safe and secured service delivery 24/7 to users worldwide.

The Public Regulated Service (PRS) of Galileo is expected to reach Initial Operational Capability by the end of 2023.

Undertaken by a European partnership, the European Commission manages Galileo, with EUSPA overseeing Galileo operations and service provision and ESA as the design authority overseeing its development, procuring satellites, and the ground segment.