The launch of the European Union Space Programme and its entry into force will be celebrated at a special online event to be held on June 22. The event will focus on how the Space programme marks a fresh start to an ambitious Space Agenda for Europe and showcases the contribution of the EU Space Programme to Europe’s digital and green transitions and the EU’s priority policies. For more information and to register, click here. 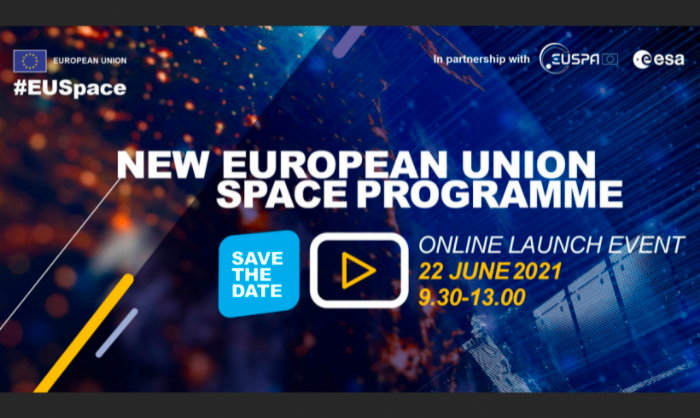 At the June 22 event, high-level decision-makers will discuss pressing issues related to space.

The event, which takes place from 09:30 to 13:00 on June 22, features high-level decision-makers and round table sessions discussing pressing issues such as cooperation amongst the space actors, entrepreneurship opportunities, and how the EU Space Programme contributes to various EU policies.

The event will open with statements from European Commissioner for the Internal Market Thierry Breton, Portuguese Minister for Science, Technology and Higher Education Manuel Heitor and MEP Cristian Busoi on the entry into force of the new Regulation. This will be followed by the formal signing of the Financial Framework Partnership Agreement.

Meeting with the press

A press event will start with Commissioner Breton statement.  European Union Agency for the Space Programme (EUSPA) Executive Director Rodrigo da Costa, European Commission Director-General for Industry and Space Timo Pesonen and ESA Director General will give the media an opportunity to have their questions answered.

The EUSPA Executive Director and the DG DEFIS Director General will then participate in a session on successful cooperation within the EU Space Programme, along with MEP Massimiliano Salini  and European Space Agency Director General Josef Aschbacher.

The event will end with a session on how the EU Space Programme is enabling EU policies and supporting EU entrepreneurship, with participation by Ekaterini Kavvada from DG DEFIS, EUSPA Head of Market Development Fiammetta Diani and European Centre for Medium-Range Weather Forecasts (ECMWF) Director General Florence Rabier.

The conference is co-hosted by the European Commission/DG DEFIS, the European Union Agency for the Space Programme (EUSPA) and the European Space Agency (ESA).

On 6 June 2018, the European Commission presented the new Space Programme for the period 2021-2027. The aim of the Programme is to ensure investment continuity in EU space activities, encourage scientific and technical progress and support the competitiveness and innovation capacity of the European space industry.

And this: Going green? Look to EU Space!